A walk for Hope Street in Glasgow. Available as an audio walk here. Full text below.

1. Please use your own mobile device with headphones to experience this walk.
2. The audio track is available on Soundcloud. The app can be downloaded in advance and the track is available at the link above.
3. The starting point is on the steps outside the Royal Conservatoire of Scotland on Renfrew Street. The route heads down through the city and follows the length of Hope Street arriving under the bridge on Argyle Street.
4. The track can also be listened to elsewhere at other times.
5. Nobody will be left behind.

A walk down Hope Street.

In a moment, we invite you to walk down Hope Street towards Glasgow’s Central Station, then underneath the railway bridge to the Argyle Street Arches.
If you are walking this route elsewhere, find a place you would like to go – a street, or a track, a desire path maybe, and, when prompted, we invite you to begin.

The walk will take around fifteen minutes, depending on your pace.
Wherever you are, make sure you are safe, and that you take care underfoot.

We are going on a journey now, for this place, but also for other places.

You are invited to hope.

Stand on Renfrew Street, in front of the Conservatoire, and face the city.

On the corner to the left, a bike shelter. A node between vectors. Busses, taxis, cars…
And for those cyclists whose vehicles are left in one piece, a lighter and more sustainable way of moving at pace through the city. But we make our journey on foot.

If you look past the bikes and up towards the end of Hope Street, you will see the Theatre Royal. Nearby is the New Atheneum and the Chandler Theatre. Peeking up over the buildings along Renfrew Street is Cineworld. You are surrounded by theatre spaces, by stages, by screens.
But the streets of this city can also be experienced as a site for performance. The pavements of Hope Street can be a place to witness, to connect, to notice, to care.

Here you can see the performances of the everyday: the stories, the people, the lives – human and more-than-human – that inhabit this place.

Set off down hill at your own pace.

Hope Street has been at the top of the list of Scotland’s most polluted streets for many years. It has the highest levels of nitrogen dioxide – a pollutant from diesel vehicles – to be found anywhere in the country.

In Islands of Abandonment, Cal Flyn rejects the doomsday scenarios for our planet:
“I cannot accept their conclusions. To do so is to abandon hope, to accept the inevitability of a fallen world, a ruinous future. And yet everywhere I have looked, everywhere I have been – places bent and broken, despoiled and desolate, polluted and poisoned - I have found new life springing from the wreckage of the old, life all the stronger and more valuable for its resilience”

We are walking against the flow of traffic.

Glasgow city centre is laid out in a grid pattern.

One of the things that people say, so it might be true, is that New York’s grid was modelled on Glasgow.

So let’s walk down a street in New York.
Past Candy Corner and USA Beauty and further into the grid.

We are moving now. Head past the recently defunct Watt Brothers department store, the place where Glasgow aunties would get their crystal and dinner sets…
A casualty of the pandemic closures on the high street.

The restaurants and food outlets on this street tell the stories of migration, of globalisation, of fast food and convenience food and lunchbreaks and unrecyclable coffee cups that will end up in landfill.

Take a peek down the lanes you pass as you walk. These are the spaces in between, the city’s crevices, its wrinkles.

On your left you will soon see the Lion Chambers, one of the many buildings in the city centre which is derelict, no longer used, no longer functioning, eroding and abandoned, unviable and perhaps unfixable, but still standing.
As “Glasgow’s Forgotten Skyscraper” this building has many common local features:
Corner turrets and a pair of steep gables on the roof.
Romanesque arches and gothic style pointed windows.

Today, the building waits for either renovation or demolition. These chambers were constructed using a system designed by French Engineer, François Hennebique:
Reinforced concrete: an alternative to steel frames, making the building fireproof.
Before steel frames there were wooden frames, even more of a fire risk.
Glasgow: Tinderbox city, city of fires.

Someone once said of this city, “look up”. When you are walking through the grid of streets, cast your eyes upwards. Raise your chin and gaze skyward. Glasgow at eye level, at street level, is retail, offices, bus stops, bins. It is any high street anywhere. If you set your sights higher, if you look up beyond the ground level shop fronts, another Glasgow is revealed.

There are more stories in the upper storeys. Travelling through these streets on the top deck of a bus reveals more intricately adorned facades – architectural styles jostling together and a cast of stoney characters reaching out from their stages to draw you into their worlds of pigeons and buddleia.

At the bottom of Hope Street, on the right, is Atlantic Chambers, the earliest example of several New York-style elevator buildings. The height of the buildings here, along with the perpendicular streets, makes this part of town a favoured film location for recreating American cities.

Our journeys have been curtailed, prohibited, realigned with a global pandemic. There is now a precedent for staying at home, which is something we should probably have been doing more often regardless. Travelling like we have done at times over the last ten years has been reckless and destructive. The planet burns and we fly round the world to make art.

Walking down Hope Street takes us further than might be assumed.

They filmed Indiana Jones here in the summer of 2021. Just as the post lockdown streets reopened and pedestrians retuned. They closed a large section of Hope Street to film car chases and a garish float parade. A giant moon on the back of a lorry. Harrison Ford, presumably. The whole area was full of stars and stripes and yellow taxis.

Alternate architectures ancient and modern, juxtaposed and jumbled up, contemporary glass next to Edwardian red sandstone next to brutalist building next to boarded up mansion. Glasgow’s revisions and renovations and regenerations, successful and failed, all stark against the skyline.

The city’s history is written on the buildings, these street names, these architectures. Coal, colonialism, climate change. All part of the same story.

Keep walking. You may be able to see Central Station now, the sweeping curves of the Grand Central Hotel. The world's first long-distance television pictures were transmitted here on 24 May 1927 by John Logie Baird. Glasgow connecting to the world.

Not too far away from here, the famous Glasgow School of Art designed by Scottish architect Charles Rennie Mackintosh has suffered not one, but two recent fires.

The ABC on Sauchiehall Street was also destroyed, and in May 2021, the Old College Bar, one of the oldest pubs in Glasgow was ravished by fire and has been demolished.

The village of Grahamston once stood in the place now occupied by Central Station. The Duncan’s Hotel building on the west side of Union Street, and the Grant Arms pub on Argyle Street are all that remain, but Alston Street – once running parallel to Union Street and Hope Street – was demolished along with the rest of the village to make way for the station. Bear that in mind as we move through this place. We’re walking through Grahamston as well, as we walk down Hope Street.

As you approach Central Station, there is a statue, a sculpture called Citizen Firefighter, a figure made of bronze, wearing firefighting gear and breathing apparatus.

Less than three months after it was unveiled, Citizen Firefighter became a focal point for the people of Glasgow after the events of September 11th in New York. The statue seemed to many to be the right place to leave flowers and tributes to the firefighters who died in those events.

At this moment, wild fires rage around the world.
“Our house is still on fire.”

One of the station's most famous architectural features is the large glass-walled bridge that extends the station building over Argyle Street, nicknamed the 'Hielanman's Umbrella' because it was used as a meeting place for those from the highlands of Scotland to gather in the city

Past the cafes, takeaways and bars.- Japanese, Lebanese, Indian and Irish.
Past the ensemble of buildings
And through the various time periods they nod to, or capture.
Past the intersecting and converging routes of private and public transport:
Mobility scooters and wheelchairs, cyclists, walkers and joggers.

Past Sunset Beach, which you will see on the corner as you come to the end of the road.

Head under the ‘umbrella’ and find the entrance to the Argyle Street Arches,
where we will reconvene.

The arches have been here for over a century now.

There used to be a theatre here.

We are close now, under the bridge, underneath the arches.

Pause before you cross Argyle Street. Look back up Hope Street, the path you have just walked.

‘And yet, everywhere I have looked…’

The buddleia, the butterfly bush, growing out of windows and along ledges, silhouetted on the skyline, whisper of hope.

The pigeons nestled in loft spaces, biding their time, murmur of hope.

The grasses poking through pavements, seeking the sunlight, hum of hope.

The seabirds hovering high above the urban landscape, shriek of hope.

We are here now.

We are here. Now. 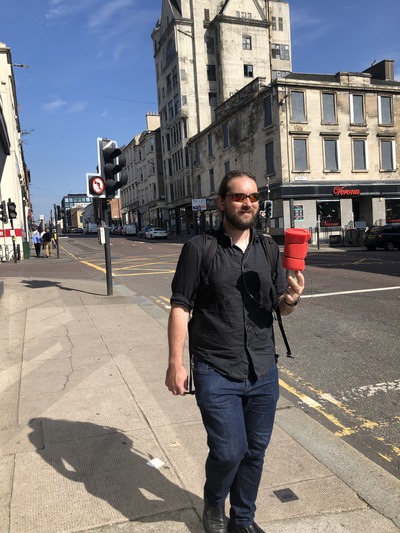