Under the Surface of Knepp

(This was written as a response to the Performing Wild Geographies event which took place at Knepp Estate on the 2-4th October 2017).

An arch of ghostly manta rays

Entrance to a wild place 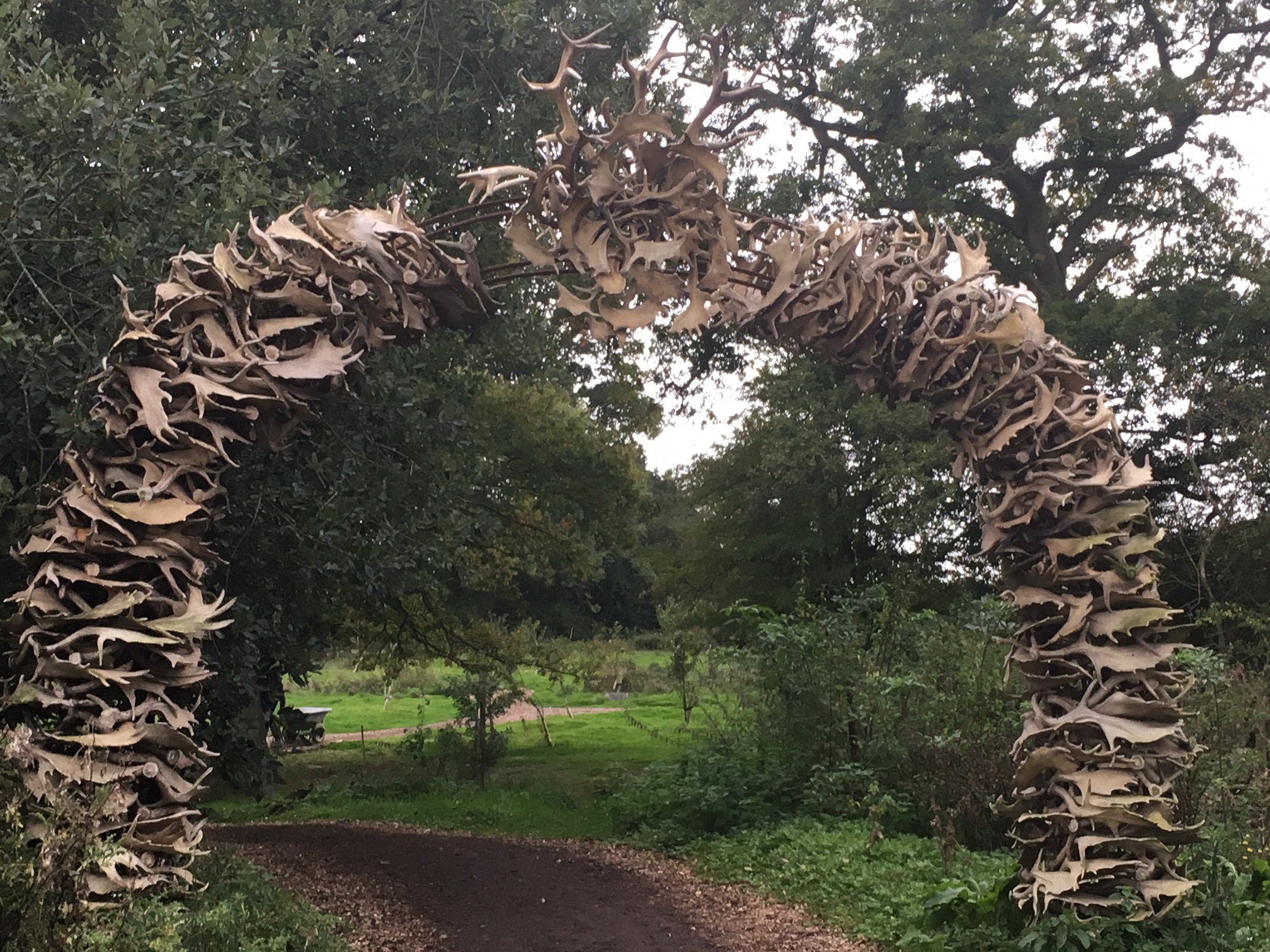 Although the Knepp Estate is around fifteen miles from the sea, with no coast visible, under the surface of this wild place I could feel the sea. Not only through water which I encountered at times, on the dawn walk by the Millpond and at the Oak-lined stream, but also in flashes of images, fragments of conversations, and through the experiences of my body. As oceanographer Rachel Carson reminds us, our bodies hold ancestral residues: “our inheritance from the day, untold millions of years ago, when a remote ancestor, having progressed from the one-celled to the many-celled stage, first developed a circulatory system in which the fluid was merely the water of the sea” (Carson, 2014: 20).

Penny Green, Knepp’s conservationist, told our group when we were on a wildlife safari that there was a hope to connect Knepp to the sea in the future. This made me think about how the acres of wild, green space, bustling with wildlife, provide clear, visual evidence of the success of Knepp’s rewilding programme. The ecology of the sea and its decline, however, seems invisible to us, the collapse happening under the surface of the water. Naomi Klein in This Changes Everything (2014), writes that unlike the visible damage of pollution to species such as sea-birds and mammals, the effect on larvae and aquatic eggs are unseen: “Rather than some camera-ready mass die-off, there would just be… nothing. An absence. A hole in the life-cycle” (Klein, 2014:426). This damage to sea environments after a large-scale pollution event might not be perceptible in marine life until two or three years after the episode, when, instead of usual volumes of fish and aquatic wildlife, a “handful of nothing” will be the only evidence of the harm that has been done (ibid: 431). Rather than a mass-extinction event, or a decline of species over time, some of the human-caused stresses to marine environments can result in swift, huge depletions in sea-life with little media coverage or most people even realising. My time at Knepp made me consider how approaches to rewilding could be translated to other environments. How could the successful rewilding processes used at Knepp be applied to other (potentially more expansive, difficult and unwieldy) spaces? What does an underwater Knepp look like? How do we rewild the sea?

The predominant Western view of the sea might be characterised as that of a quintessential wilderness, according to John Mack: “the sea… was empty: a space not a place. The sea is not somewhere with ‘history’, at least not recorded history. There are no footprints left upon it” (Mack, 2011:16). The sea differs from other landscapes due to its expansiveness (70% of the Earth’s surface is covered in water) but also due to its materiality: humans cannot access ocean landscapes in the same way that they might a field, mountain, or forest, and the wetness and depth of the seas allow for human engagement only from its edges or its surface. Mack says there are two alternative cultural views of the sea: “one which constructs it as an unwelcome and unwelcoming wilderness where the land is a reassuring point of reference; the other which sees it as entirely familiar and unthreatening. These are, however, only characterisations of two extremes” (Mack, 2011:74). Our inability to reach ocean environments has exacerbated a reluctance to care for or conserve them. While there are some Marine Protected Areas and marine conservation areas, across the world the health of our seas is in crisis. In 2017 global warming caused the worst coral bleaching to date, and overfishing and marine pollution (both plastic and chemical) is devastating marine species.

Sam Trubridge states that humans “may require a boat, a swimmer or a figure of some kind in order to encompass its vastness, to provide human scale or to somehow traverse it conceptually or geographically“ (Trubridge, 2016:1). As well as the physical engagement with the sea that shapes our experience and relationship with it, there are also emotional or metaphysical aspects and frequently the sea has been portrayed as a mirror to human consciousness (as depicted in Joseph Conrad’s The Mirror of the Sea, 1906). Is it only through self-identification and “mirroring” that we can care for the sea, or can humans begin to consider it as a more-than-human environment in itself? Not “as alien ‘other’; as featureless wilderness” (Brown and Humberstone, 2015:188) but as Anderson and Peters claim, “our world is a water world. The oceans and seas are intertwined, often invisibly but nonetheless importantly, with our everyday lives.’ (2016:3). Can we care for it as a “vital space” itself as opposed to an anthropomorphised entity?

Knepp seemed to me to be a liminal space, a place of possibility, an edgeland. I was reminded of Carson’s thoughts on tidal areas in the second book of her Sea Trilogy, The Edge of the Sea: “The shore is an ancient world, for as long as there has been an earth and sea there has been this place of the meeting of land and water. Yet it is a world that keeps alive the sense of continuing creation and of the relentless drive of life” (Carson, 2014: 8). Clearly before we attempt to rewild marine environments we need to urgently put in place measures to stop unwilding them through plastic/chemical pollution and overfishing. Some of the earth’s most ancient living inhabitants are sea-dwellers with species of clams, molluscs and turtles dating back millions of years..

Carson says that in the sea nothing lives “to itself”, that the sea water itself is changing due to the creatures that inhabit it: “the present lined with past and future, and each living thing with all that surrounds it” (Carson: 2014:42). My time at Knepp reinforced and reinvigorated my feeling of kinship and collaboration with our more-than-human world. Under the surface of my time at Knepp I felt sympoiesis – “collective creation” or “making with” (Haraway, 2016: 5) - my environment; as Haraway says: “we become with each other or not at all” (2016: 4).

In the archway of bone and antlers I saw a dead coral reef, an exposed monolith, a warning. I saw the sea in the fields. I saw the struggle of ancient species to survive in this modern world. I saw one environment as a palimpsest of many environments, and I saw myself in it too. I saw this under the surface of the green, wild meadows of Knepp. We need to look under the surface of our seas to see what life is struggling to be witnessed as we inadvertently unwild it. How do we rewild the sea? Conrad, Joseph. 1988. The Mirror of the Sea and A Personal Record. Oxford: Oxford University Press.